Continuous laser welding technique uses a high-power laser beam as a heat source to irradiate the surface of the workpiece, so that melting and connecting occurs, then, a beautiful weld joint formed. In such process, the laser beam is irradiated on the material’s surface to melt the workpiece. However, the vaporization of metals melted will also occur, thus forming metal vapor plasma. That vapor has an effect on absorption, refraction and reflection for laser, resulting in the energy actually reaching the surface of workpiece reduced, to affect the stability of the molten pool.

Therefore, during the welding process, blowing shielding gas with a higher ionization energy is required to suppress the generation of plasma. At the same time, such shielding gas also has an effect on isolating the air to prevent the molten pool from oxidized and reducing the welding spatter for a smooth, uniform welding surface.

Influence of Parameters on Weld morphology

In the test, controlling other variables of blowing at the same condition, the effect on weld morphology at different flow rate is the same, however, the larger the flow rate, the more obvious effect on the weld penetration, meantime, and the effect on the surface and lower weld width are small. Therefore, only change blowing angle while shielding gas flow is 5L/ min and other variables controlled. The results are shown in Figure 1. The weld cross-section metallography image is shown in Figure 2. 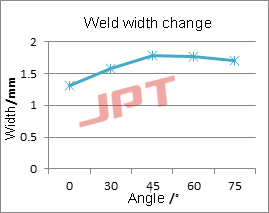 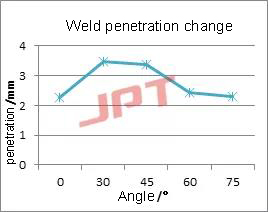 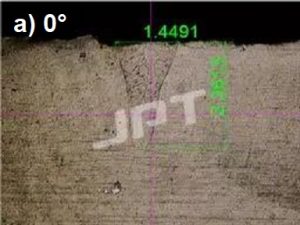 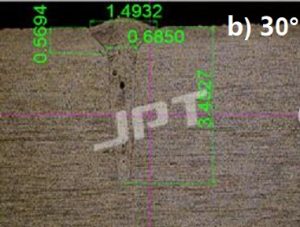 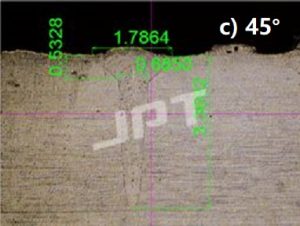 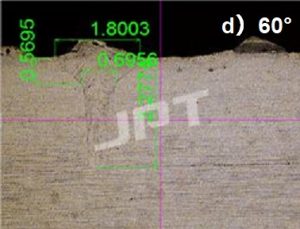 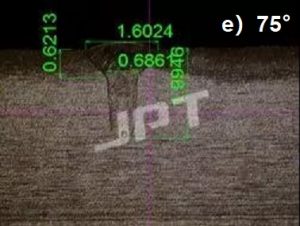 The weld width of welds is determined by the attenuation of plasma on laser and the effect of gas flow on molten pool. When the blowing angle is 0°, the weld width is the smallest. The melting width increases with increasing blowing angle, and when the angle is greater than 45°, the width changes little.

The effect of shielding gas on weld morphology is mainly controlling by plasma size which determines the power density of laser that reaches the surface of the workpiece. Observing the weld cross-section metallography image, it can be seen that the morphology tends to
thermal conductivity welding model at 0 ° or 75 °, and it shows obvious deep penetration at 30 ° and 45 °.